Being an Amazon Prime member has several benefits. In fact, we’ve shown you several Prime features you don’t know about. Once you dig deeper into each individual service, like Prime Video, you discover more helpful features. If you are a cord cutter and an Amazon Prime Member, here are five features that will help improve your overall viewing experience.

Amazon Prime Video provides the ability to download videos to your PC or mobile device. This allows you to binge movies and TV shows on your phone or tablet when you don’t have a data connection. This comes in handy if you’re heading on a long flight or road trip, for example. This works with a Kindle Fire tablet or iOS or Android device with the Prime Video app installed. 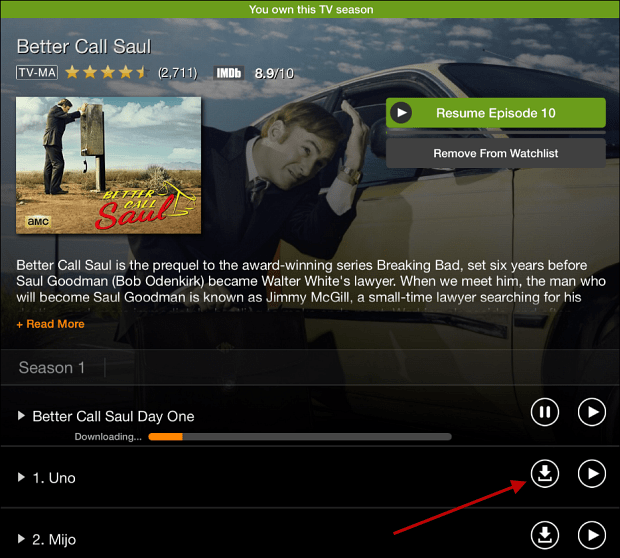 You Can Stop Auto-Play

One of the biggest annoyances on any video service is auto-play. When you’re at the end of an episode or movie, you’ll see a “Next Up” windows and it will automatically start playing the next show. Or, in the case of movies, it will start playing something that its algorithm thinks you’ll like. If you’re not a fan of the option, you can turn it off. Make sure you’re logged in and head to the Prime Video Account & Settings page. Under the “Playback” section turn it off.

Even if you’re not an Amazon Prime Member you can watch some Prime Video content for free. Amazon owns IMDb – bet ya didn’t know that! This is one reason it’s heavily integrated throughout Amazon’s Fire OS on tablets and its Fire TV devices. It also allows Amazon to launch a free ad-supported streaming video service it calls IMDb FreeDive. 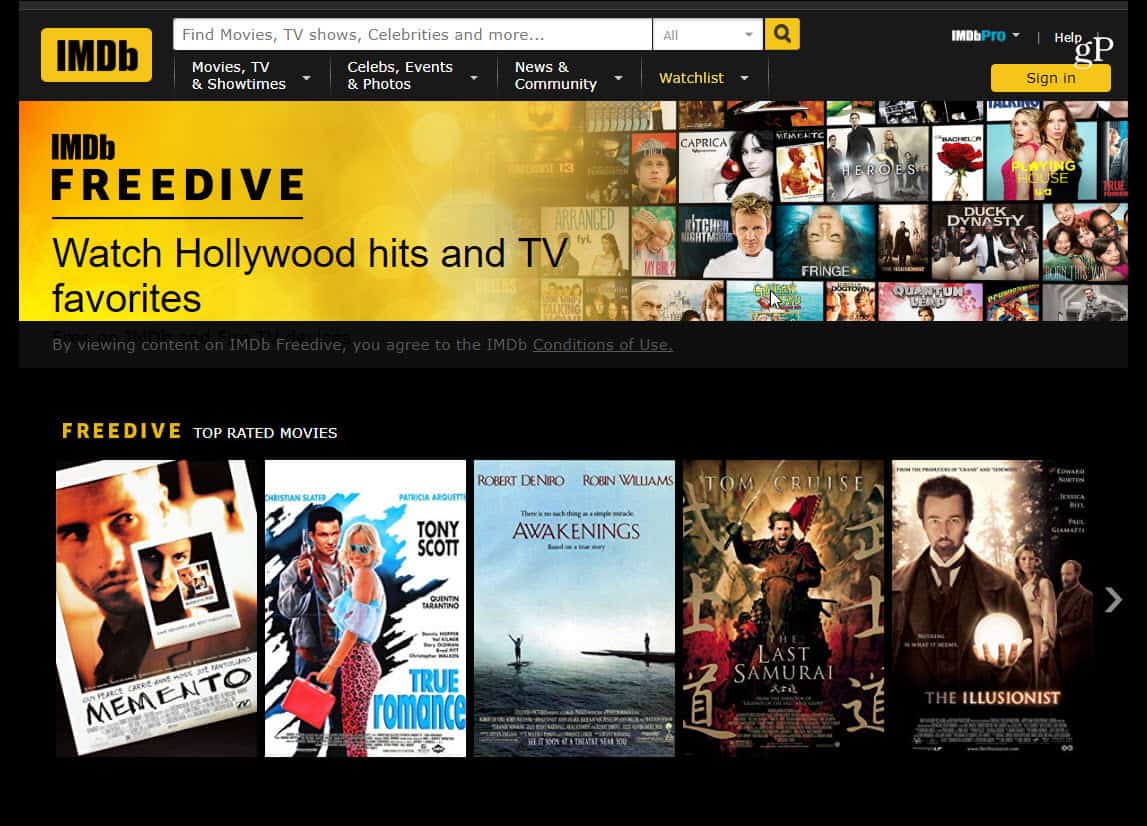 Here you can watch TV shows like Fringe, The Bachelor, Quantum Leap, and Without a Trace. It also includes hit movies titles like Drive, Awakenings, The Last Samurai, Seven, Platoon, and many others. It’s all free to watch. But similar to other free video streaming services such as the Roku Channel, it does include the occasional ad break.

Speaking of Amazon owning IMDb, if you own a Fire tablet, you can use it as a so-called “second-screen device” while watching content on your big screen. With the X-Ray feature, you can then use your tablet as the second screen experience. It gives you IMDb data where you can find more details about the cast and characters in a scene. You get a list of other programs the actors have been in, similar shows to the one you’re watching, trivia, and a lot more. 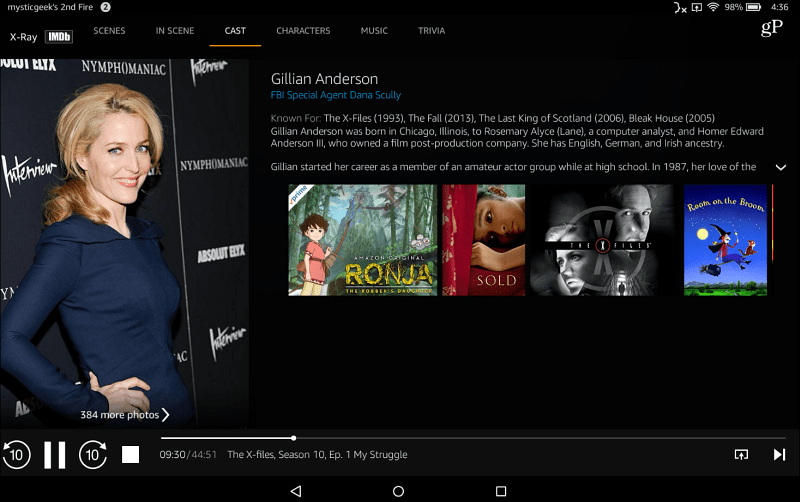 For more details, read our article: How to Use Your Fire Tablet as a Second Screen Device with Fire TV.

It’s also worth noting that you don’t need to be a full-on yearly Amazon Prime member to enjoy its Amazon Originals like Man in the High Castle or The Marvelous Mrs. Maisel. Amazon offers Prime Video for $8.99/month (cheaper than Netflix). So, you could just binge a few of its shows that you’ve been wanting to watch over the course of a month or two. And only pay for a month at a time versus a full year and cancel anytime.

To do it, head to the Amazon Prime subscription page. Then, under the big “Try Prime” button, click on the “See More Plans” link.

There you can choose the Prime Video plan for $8.99/month. What’s cool is it also offers some of the annual Prime membership benefits like free two-day shipping, music streaming, and more. So, while you’re binging for a month you can 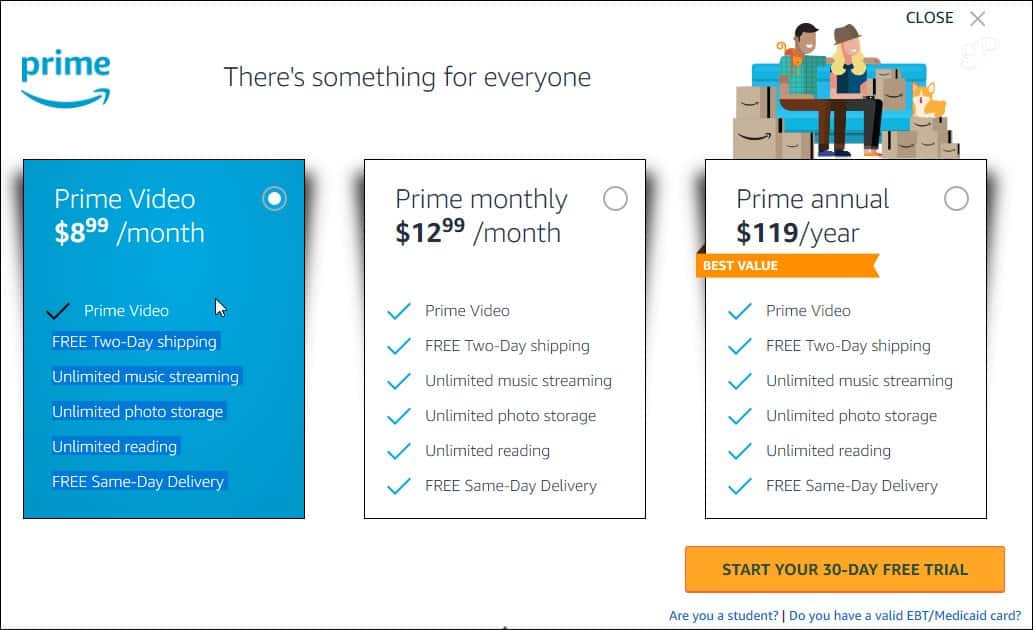 These are just a few of the perks of when using Prime Video. It also has other features you’d expect like parental controls, closed captioning, and more. And just like with The Roku Channel and the updated Apple TV app, you can subscribe to premium channels like Starz, HBO, and Showtime directly from Prime Video Channels.

It’s also worth noting that some titles are limited to geographical areas and the amount of time you have to view a downloaded video varies by title. Amazon says:

Only selected Prime Video titles are available to download, and the time period you have to view a downloaded title while your device is offline varies by title. A notification typically displays on-screen when the viewing period for a title is almost over.

If you are new to video streaming services or want to learn more about getting rid of cable, check out our Complete Cord Cutting Guide.